An orthophoto, orthophotograph or orthoimage is an aerial photograph /satellite images/drone images or image geometrically corrected (“orthorectified”) such that the scale is uniform: the photo has the same lack of distortion as a map. Unlike an uncorrected aerial photograph, an orthophotograph can be used to measure true distances, because it is an accurate representation of the Earth’s surface, having been adjusted for topographic relief, lens distortion, and camera tilt.
Orthophotographs are commonly used in Geographic Information Systems (GIS) as a “map accurate” background image. An orthorectified image differs from “rubber sheeted” rectifications as the latter may accurately locate a number of points on each image but “stretch” the area between so scale may not be uniform across the image. A digital elevation model (DEM) is required to create an accurate orthophoto as distortions in the image due to the varying distance between the camera/sensor and different points on the ground need to be corrected. An orthoimage and a “rubber sheeted” image can both be said to have been “georeferenced” however the overall accuracy of the rectification varies. Software can display the orthophoto and allow an operator to digitize or place linework, text annotations or geographic symbols (such as hospitals, schools, and fire stations). Some software can process the orthophoto and produce the linework automatically.
An orthophotomosaic is a raster image made by merging orthophotos — aerial, satellite or drone photographs which have been transformed to correct for perspective so that they appear to have been taken from vertically above at an infinite distance.
Image rectification is a transformation process used to project images onto a common image plane. This process has several degrees of freedom and there are many strategies for transforming images to the common plane. 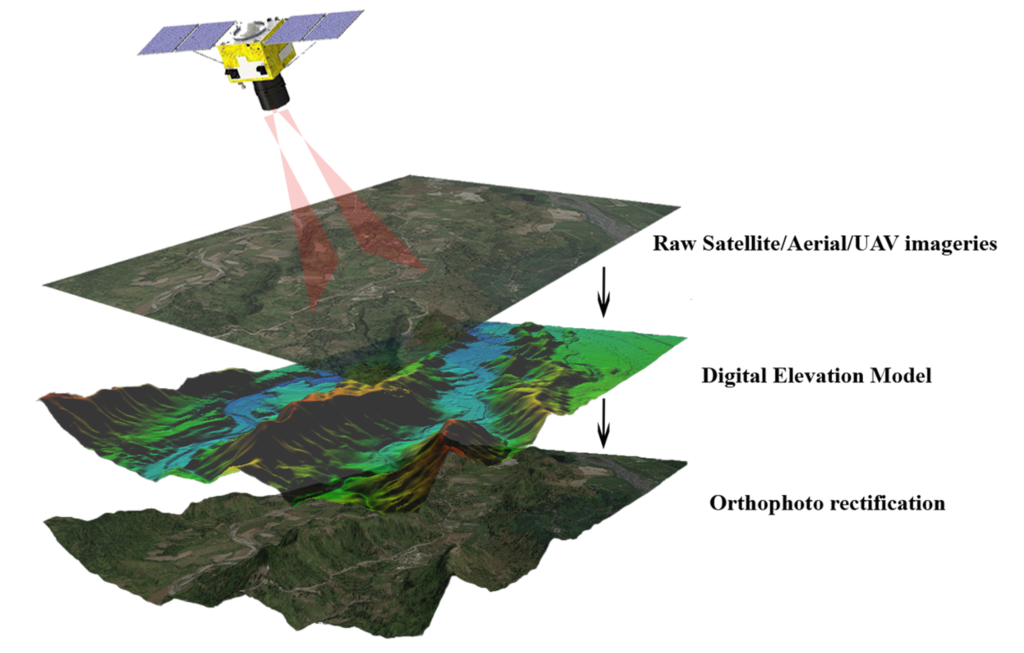